In North Carolina, the United Church of Christ has launched a legal challenge to the state ban on gay marriage, because it limits their religious freedom to decide which couples it may bless in marriage.

Also in the South,  United Church clergy have joined with Methodist and other religious leaders in a coalition to support gay marriage – because they are Christians, not in spite of it.

More than 50 Oklahoma faith leaders have formed a coalition in support of marriage rights for all couples, whether gay or straight.The Oklahoma Faith Leaders for Marriage group includes leaders of congregations of Mennonites, United Methodists, Unitarians, Episcopalians, United Church of Christ and at least one Baptist minister and two rabbis. 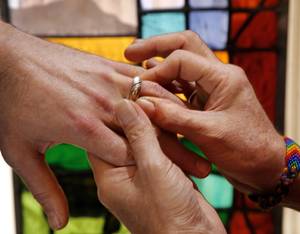 Standing in the sanctuary of Church of the Open Arms, Kenny Wright and Bo Bass are an Oklahoma City gay couple who say they will get married in Oklahoma if the state’s same-sex marriage ban is overturned. Photo by Jim Beckel, The OklahomanThe United Methodist and United Church of Christ denominations have the most coalition representation, with at least eight United Methodist clergy and at least eight United Church of Christ ministers among the faith network’s members.“Expanding marriage equality will finally remove a long-standing obstacle to our pastoral care — and allow us to minister equally to all families in our community,” the coalition said in a statement released after its April launch.

In December 2013, Methodist pastor Frank Schaefer of central Pennsylvania was defrocked after he officiated at his son’s gay wedding. Huffington Post reports on a similar case, and other Methodist pastors who are defying church regulations, by conducting same – sex church weddings, or by living openly with a same – sex partner.

Rev. Thomas Ogletree, Another Methodist Pastor, To Be Tried For Presiding At Same Sex Wedding Of Son

The United Methodist Church has formally charged another clergyman for presiding at the same-sex wedding of his son.

The Rev. Thomas Ogletree will be tried March 10 for violating church law against officiating at gay unions, his spokeswoman, Dorothee Benz, announced Friday. It’s the second high-profile United Methodist trial in recent months over same-sex relationships. In December, pastor Frank Schaefer of central Pennsylvania was defrocked after he officiated at his son’s gay wedding. The church considers homosexuality “incompatible with Christian teaching.”

Ogletree is a theologian, a former Yale Divinity School dean and a retired elder in the church’s New York district, or Annual Conference. Some clergy had filed a complaint after his son’s 2012 wedding announcement appeared in The New York Times.

Ogletree, 80, said he could not refuse his son’s request to preside at the wedding, which was held in New York, where gay marriage is legally recognized.

A United Methodist minister who was suspended for officiating at his son’s gay marriage said on Monday he will not voluntarily surrender his religious credentials even though he cannot uphold his church’s doctrines on issues relating to same-sex marriage.