Breaking news today is that the New South Wales state assembly has narrowly approved a bill to put LGBT and heterosexual couples on an equal footing for adoption procedures. There are still a few hurdles to clear before this becomes final, but (as far as I can tell), with this one, the biggest has now been cleared. This is big news for queer Catholics. The formidable Cardinal Pell made clear his strong opposition – but the equally strong support of the Catholic NSW Premier, Kristina Keneally, appears to have been decisive in providing just enough resistance. 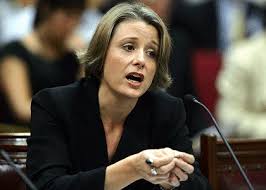 Perhaps it was the full-fledged backing given to the Bill by New South Wales Premier Kristina Keneally, a devout Catholic, which took the wind out of the sails of opponents. “In forming my position on this Bill, I have considered my experiences as a mother, my responsibilities as a parliamentarian and my conscience as a Christian and member of the Catholic faith,” she told lawmakers. Instead of proving divisive, it served to unite New South Wales’s main political outfits with Opposition Liberal Party leader Barry O’Farrell also voting in its favor.

This is an important reminder to all of us that the “Catholic Church” is far more than the bishops and cardinals who claim to speak for us. They are fully entitled to speak on behalf of the Vatican and Vatican doctrine – but when they claim to speak on behalf of “the church”, research evidence consistently shows that they deceive. On numerous issues of sexual ethics, ministry, and papal authority, the evidence is that right across the globe, most Catholics simply do not agree with orthodox Vatican doctrine.

This decision is also important as another indicator of an Australian paradox. In the global march to family equality, Australia stands out as an oddity. Although surveys have shown that a strong majority of Australians support full marriage and adoption rights for same sex couples, there is still no national provision for either, and both of the major political parties opposed full equality during the recent election campaign. Below the surface, however, there have been increasing signs of a gathering groundswell of support that could soon force the issue. The election result, which produced a hung parliament with increased influence for independents and a stronger Green Party, may show the major parties how mistaken they were – and may pave the way for a major rethink. It is significant that the NSW result came after a “conscience” vote in the assembly (that is, members were permitted by their whips to take their own decisions, rather than following a party line). It is believed that a conscience vote on marriage in the national parliament could attract significant support.
Meanwhile, even as Canberra dithers, there are regular advances at state level, with the adoption decision in New South Wales just the latest of several.   Earlier this week the Tasmanian lower house voted to recognise same sex marriages conducted elsewhere, which means that Tasmanian couples will be able to secure secure legally recognised marriage easily enough – provided only that they are willing to travel abroad for the wedding. (Several countries which currently recognise marriage equality do not have residency requirements. Nepal could soon be another.)
Gay adoption is already recognised in Western Australia and the Australian Capital Territory, which is also the only state to conduct formal civil partnerships. (New South Wales and Victoria maintain less formal domestic partnership registers, which makes it easier for same sex couples to achieve the de facto recognition that in principle they are entitled to – but which in practice can be difficult without suitable documentary evidence of the relationship.)
Each separate move at state level inevitably leaves the population that much more accustomed to the idea of family equality, and queer families increasingly visible as ordinary members of society, deserving equal treatment before the law, just like everyone else. Each advance bring the next one closer, eroding still further the resistance. Even before the vote in last month’s election, the Greens were promising to introduce a bill to provide for national gay marriage. When they do, they and the newly influential independents in the hung parliament will aim to secure a conscience vote. I suspect that even if they get one, it is unlikely that gay marriage will pass just yet. However, it is clear that Labour at least lost votes as a result of their stand against equality. The coming vote on a Green bill for marriage equality will not be the last. Sooner or later (and probably the former), the politicians will realise they are on the wrong side of history, and stand up for justice.
Cardinal Pell will soon have a lot more to worry about than adoption equality in one more Australian state.