Bishop Charles was the first openly gay bishop in any Chrisitian denomination.

Since 1979 he has been among a growing number of bishops who have spoken out for full and complete inclusion of gay and lesbian people in the church without restriction, recognizing their calling to ministry and rejecting the notion that a baptized homosexual must live a celibate life. In 1980, he was the recipient of the national Integrity Award. He is represented in Out in the Workplace: Gay and Lesbian Professionals Tell Their Stories.
Upon his retirement in 1993, Charles publicly announced his homosexuality, becoming the first openly gay bishop of any Christian denomination. That September he sent an epistle to his colleagues in the House of Bishops that said, in part: “I have promised myself that I will not remain silent, invisible, unknown. After all is said and done, the choice for me is not whether or not I am a gay, but whether or not I am honest about who I am with myself and others. It is a choice to take down the wall of silence I have built around an important and vital part of my life, to end the separation and isolation I have imposed on myself all these years.”
John McNeil, former Jesuit and author of Freedom, Glorious Freedom speaks of Bishop Charles’ coming out as “an extraordinary example (of the) public exposure… required… to… provide an image… of what it is to be mature as Christian and as gay” (pp.82-83). In Last Watch of the Night, Paul Monette wrote of Bishop Charles’ coming out as “an important moment in gay and lesbian history, and a ringing challenge to the status quo of invisibility” (p. 304).
The Sunday edition of the New York Times (October 10, 1993) as well as both gay and straight press around the country reported the bishop’s action. Boston’s Bay Windows editorialized: “the news of a 67 year old bishop coming out of the closet is something at which to marvel. Charles puts it less grandly, however, saying simply that it was a matter of integrity.”
After making his public witness Bishop Charles, who appreciates being addressed by his baptismal name, Otis, has welcomed the opportunity to share his story. Whether in an informal gathering or the pulpit, he characteristically begins, “I am a gay man, an Episcopal (Anglican) bishop, a queer who only just mustered the courage to publicly acknowledge the truth of my life.”
Charles has continued as an active and voting member of the Episcopal House of Bishops taking many stands on behalf of his community. In 1995, Charles co-founded Oasis/California, the Bay Area Episcopal Lesbian and Gay ministry. In 1998, Charles was appointed Interim Dean of the School for Deacons serving northern California. During this time he also served as  Bishop-in-residence at the Church of St. John-the-Evangelist in San Francisco and a founding editor of Millennium3, an on-line and print publication distributed to all 13,600 Episcopal clergy. He was an Assisting Bishop in the Diocese of California until 2004.
Charles is currently working on his memoirs and editing a collection of personal reflections on the contribution of entheogens as an opening to mystical experience. Since 1993 he has been a resident of San Francisco where he lives with his partner, Felipe Sanchez Paris.

The world’s first transsexual nun also deserves a mention in military history. She served twice, once as a man and once as a woman, before being honourably discharged (for the second time). It was then that she entered religious life as an Episcopal nun. 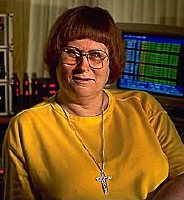 Born in Pontiac, Michigan, Clark was christened Michael by his parents. But he soon realized nature had made a horrid mistake.

“From the time I was 3, I felt that I was different from other boys. I felt more comfortable in the company of girls. I tried to talk and act like a girl instead of a boy. I believed I was one of them – even though I knew I had a male anatomy. When I started going to elementary school, the other boys called me a sissy because I walked without ‘macho’ stride and carried my schoolbooks like a girl.”

When he reached junior high school, Michael tried to talk to his parents about his mental torment. It didn’t work. After finishing high school in 1957, Clark went on active duty with the Naval Reserve. Two years later he entered the regular Navy. Within a few months he took my greatest step to show everyone he was ‘normal.’ and got marreied. The marriage was very painful for both because he couldn’t satisfy her needs and desires. It was further complicated by the fact that they had a son.
During this disastrous marriage he threw himself into Navy career, serving in Hawaii and Vietnam as an instructor in anti-submarine warfare, scuba diving and sea survival. In 1972, after 11 frustrating years together, Clark and his wife divorced. He hasn’t seen his son since. After the divorce he married again. He was still desparately trying to be ‘normal’.

“My new wife was a girl that I really intensely loved as a person. I still lover her today. We liked the same things – hiking, concerts. But she needed more from me than I could give. And she started having a guilt trip over our situation, thinking she was at fault. Finally I said to myself: ‘My God, I’m reining this beautiful woman’s life by keeping my secret from her.’ So I broke down and told her I was a transsexual – a woman trapped in a man’s body. Instead of making me feel ashamed, she talked about what we had to do.”

She convinced Clark to tell his parents. Incredibly, they understood – a vast relief for him because he’d feared rejection. Then, with the encouragement of his wife and parents, Clark underwent psychological evaluation. It showed he realy was a woman inside. When the Navy found out about the evaluation, Clark was discharged. He had been an enlisted sailor in the U.S. Navy for 17 years, and rose to Chief Petty Officer. The discharge, though honorable, left him “angry and bitter” because he’d often been commended for outstanding service, he said.
Clark underwent hormone therapy, and then, in June of 1975, had a sex change operation – emerging as Joanna Michelle Clark. Joanna divorced her wife moved in with her parents in San Jaun Capistrano, California, and began a new life as a clerk-typist. But in August of 1975 a Reserve recuiter visited her office and urged her to enlist again. She revealed to him that she was a transsexual, but he said he didn’t think it would be a problem. And is wasn’t. She was accepted, becoming a supplys clerk as a Sargent First Class in the WACs…. but 18 months later she was booted out of the Army Reserve.
Ms. Clark fought the charges and discharge. The case was eventually settled out of court with a stipulation that the details of the settlement not be discussed. However, she received an honorable discharge, with credit for time served in the Reserve. The Army had capitualated on its charges… however, Ms. Clark had won a battle but lost the war. It remains unlawful for transsexuals to enlist in the services to this day, inspite of the “Don’t Ask, Don’t Tell” policy.
As Joanna Clark she lobbied successfully in 1977 for a law that allowed replacement birth certificates in the state of California. She later wrote Legal Aspects of Transsexualism, an important early document on the subject, still referenced twenty years later. She founded the ACLU Transsexual Rights Committee, serving as chair for several years, seemingly tirelessly working to improve the legal status of TS persons. Joanna served with Jude Patton as a TS advisor with a Gender Identity Clinic during the early ’80s.
She decided to become a nun; the world’s first transsexual Episcopal nun, founder and sole member of the Community of St. Elizabeth, a nonprofit religious organization. She took her vows at St. Clement’s by the Sea Episcopal Church in San Clemente in 1988. She transferred to the Order of St. Michael in 1997.
In 1990, as Sister Mary Elizabeth, she founded and continues to operate the largest AIDS and HIV online information BBS and website – ÆGiS (AIDS Education Global Information System; www.aegis.com), a definitive and comprehensive web-based reference for HIV/AIDS-related information, to meet the need for access to up-to-date HIV/AIDS information by people in isolated areas.

“Of all the things I’ve done in my life, military-wise, or working with children, I don’t think I’ve had anything in my life that I’ve had more passion for. I really can’t put it into words. When you see letters from people and you know that you’re helping them, that’s what it’s all about.”