At  New Scientist, “Zoologger” has a post up on the transsexual abilities of the hawkfish (species Cirrhitichthys falco), which is found off Kuchino-Erabu Island in southern Japan. As the post notes, transitioning in fish occurs in many species – but this one reverses the process. (Even this ability is not unique though – see Joan Roughgarden, “ Evolution’s Rainbow  “).

When it comes to selecting mates, hawkfish keep their options open. The flamboyantly coloured reef dwellers start life as females but can transform into males after maturing. Many marine animals do this, but these fickle fish have a rare trick up their fins: they can change back when the situation suits.

Tatsuru Kadota and colleagues from Hiroshima University in Higashi-Hiroshima, Japan, have observed reverse sex changes in wild hawkfish for the first time in the subtropical reefs around Kuchino-Erabu Island in southern Japan.

Hawkfish live in harems, with one dominant male mating with several females. Kadota’s team studied 29 hawkfish and found that when it comes to sex change, the size of the harem matters.

If a male hawkfish took on many females, one of the two largest females would change sex and take over half of the harem, mating as a male. Conversely, if that new male hawkfish lost a few females to other harems and was challenged by a larger male, it reverted to mating as a female, instead of wasting precious energy fighting a losing battle. “The ability to undergo bidirectional sex change maximises an individual’s reproductive value,” Kadota says.

A reader, Mario, has shared a link to a fascinating story about a domestic hen that transitioned to a cockerel, after an injury. I’ve known about transitioning in fish species for years, but this is the first time I’ve come across an instance in birds.

Long, John A:The Dawn of the Deed: The Prehistoric Origins of Sex

Long, John A: Hung Like an Argentine Duck: A Journey Back in Time to the Origins of Sexual Intimacy

A key part of the argument against homoerotic relationships, fundamental to the Catholic Magisterium, to the religious opposition more generally, and to the supporters of so-called “traditional” marriage, is that same sex relationships are somehow “unnatural”, “against natural law”. This claim is entirely without foundation. What these groups have in common, apart from their conclusion, is a total disregard for the evidence.  Some research into the Laysan albatross neatly illustrates this.  The disregard of the need for evidence does not only apply to claims for natural law: exactly the same charge can be made against Vatican claims that “homosexuals” are motivated solely by  -indulgence, and that homosexual “acts” lead one away from God – claims that likewise do not stand up to scrutiny. For now, though, I am concerned only about the problem as it applies to the argument from natural law 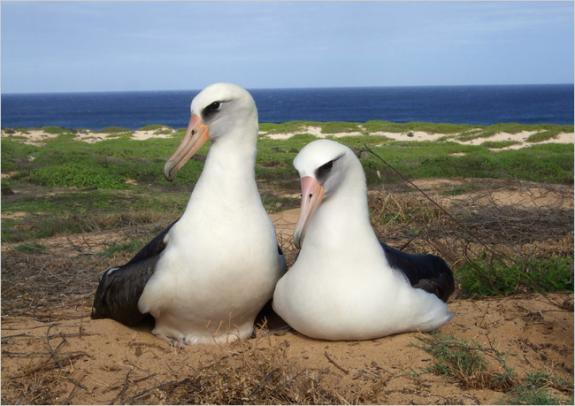 All albatrosses are large birds nesting in isolated colonies free from natural predators, which makes them easy to study (the birds are trusting and allow researchers to get up real close and personal). Much of their behaviour is well-known. For instance, in one colony at Kaena Point, Hawaii, there are about 120 breeding pairs, who gather for mating every November. They form long-term partnerships, and after copulation, lay a single egg, which they incubate in shifts, taking turns to leave the nests for weeks at a time to feed at sea. They form long-lasting, often life- long pairs, and were praised by former US first lady Laura Bush for their commitment to each other, and the example they offered as icons of monogamy. The obvious assumption that these monogamous pairs represent one male and one female in a neat nuclear family, though, turns out to be false. One third of the pairs are female couples, some of whom had nested together every year since right back to the start of data collection – 19 years.
Ornithologist Lindsay C Young  has been studying this albatross colony since 2003, as part of her doctoral dissertation.  She says that the discovery of so many female pairs forced her to question assumptions she didn’t even know she was making.  This in itself was something of a breakthrough: observations of same sex behaviour or relationships in the animal world are not new, but too often in the past, biologists have simply ignored them, or attempted to explain these observations as aberrations.
Joan Roughgarden quotes one notable scholar who claimed in 2000, at the end of a long and distinguished career,  that  “When animals have access to members of the the opposite sex, homosexuality is virtually unknown in nature, with some rare exceptions in primates”.
But just the previous year, Bruce Bagemihl had published a book reviewing published academic research into over three hundred vertebrate species which engage in same-sex courtship and genital contact. In some of these, homosexual activity is even more frequent than heterosexual intercourse.
In the case of the albatrosses though, the female pairs Young studied displayed same-sex relationships – not same-sex activity. They were female couples, conscientious parents, and engaged in just about all the activities together that other couples do – except for physical sexual intercourse. Instead, they would find a male albatross purely for copulation so that they could produce a fertilized egg.
As female pairs, these couples were physically capable of producing twice the number of eggs that other pairs could. Each bird is capable of producing only one egg each year, and so most nests hold only one egg. Yet obrsevers have frequently noted  that some nests contain two eggs, in what the biologists call a “supernormal clutch”. Early attempts at explanations speculated that perhaps some individual brds were after all capable of laying two eggs, or that some inexperienced younger females were inadvertently “dumping” their eggs in the wrong nests.. Harvey Fisher, he researcher who proposed this dumping hypothesis in 1968, after seven years of daily observations, justified his conclusion in part with the observation that “after all, promiscuity, polygamy and polyandry are unknown in this species”.
It simply had not occurred to anyone to consider that the nest might hold two females.
That was until Brenda Zaun, a biologist studying Laysan albatrosses forty years later, observed that year after year, it was the same nests which yielded double eggs. When she sent feathers from a sample of the two-egg breeding pairs and sent them to Lindsay Young  for laboratory DNA sex testing, Young simply disbelieved the finding that every brd was female, and assumed she had erred in the testing procedure.
She repeated the tests, and got the same result.. To be sure, she then went back to the field and sexed every bird in the colony, and found that 39 of 125 nests were of female – female couples: 19 where double eggs ahd been seen, and an additional 20 with single eggs.
This example is not about “lesbian” birds, or about avian “homosexual” intercourse. However, it does illustrate how easily even professional observers have in the past mistakenly applied heterosexist assumptions to their observations, which have led to completely false assumptions. Testing these assumptions against evidence leads to  very different conclusions.
The albatross female couples also illustrate how in the natural world, procreation and pair –bonding can be quite distinct. Albatross pairs, including female couples are monogamous, mutually devoted couples and careful parents: but in some cases, the physical act of copulation is only about fertilizing an egg and nothing more.
Although these albatrosses do not show signs of sexual activity by the female couples, many other species do. Bagemihl listed over three hundred such species in 1999, Joan Roughgarden and, Vasey and Sommer, have since listed many more, across all branches of the animal kingdom.  The evidence is clear: in the animal kingdom, same sex relationships and homoerotic sexual activity are no less “natural” than left-handedness.
This does not in itself make homosexuality morally “right”, but it does show that “natural law” cannot be used to argue that they are wrong. On sexual ethics, the “law of nature” is simply neutral.
Sources:
“Can Animals be Gay?” (New York Times)
Books:

To look at them, bighorn rams are the very image of hypermasculinity. They live on the rugged mountain slopes of Montana and Canada, in an environment that demands strengh, athleticism and stamina. Their appearance is impressive, with large thick horns curling back behind the ear, and they’re big, weighing up to 300 pounds. They exude so much machismo, that their image has been appropriated by numerous as a symbol for many  male athletic teams. And they like their sex – with other males. Those few who don’t, are described by researchers as “effeminate” .

For Bighorn and Thinhorn Sheep, heterosexuality is definitely not “normal”.

From “Evolution’s Rainbow: Diversity, Gender, and Sexuality in Nature and People

“The females live separately from the males. The sexes associate only during the breeding season, from mid fall to early winter. A female is receptive for about three days, and will not allow herself outside of these three days.”

This emphatically does not mean that the males endure sexual abstinence for the rest of the year.

The few males who do not participate in male sex are described as “effeminate”,. These males are identical tin appearance to other males but behave quite differently. They differ from “normal males” by living with the ewes rather than joining the all-male groups. These males do not dominate females, are less aggressive overall, and adopt a crouching, female urination posture. These males refuse mouning by other males. These nonhomosexual males are considerd “aberrant”, with speculation that that some hormone deficiency must underlie their behaviour. Even though in physical appearance, including body size and horn development, these males are indistinguishable from other males, scientists urge further study of their endocrinological profile.

(Same sex mountings have also been described in several other species of sheep and goats in North America and Europe, and in farm animals).