#KeepMrZ2013 is a movement of high school students in Seattle organizing for their gay vice principal fired for marrying his husband.  Now one more voice is speaking out in support of these youth. 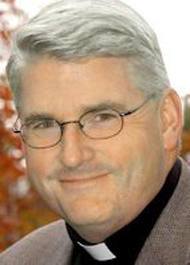 Father John Whitney, SJ, pastor of St. Joseph’s Parish in Seattle, spoke about the students from Eastside Catholic High School in his homily earlier this week.  He begins by describing the conflict in early Christianity about whether to accept Gentiles as members or only Jews, and he reflects on how this controversy was resolved:

“We must imagine the scene: the Church, still subject to occasional bouts of persecution and yet growing feverishly among both Jews and Gentiles alike, faces a great conflict—how are Gentiles to be admitted into the community?…

“What is most amazing about this moment in the Church is how the community comes to decide, together, what is to be done. There is debate and disruption, but it is not seen as division; rather, it is the way the Holy Spirit is working within the community. Further, this debate is grounded on human experience, and not on tradition or on the power of office. Rather than beginning with Scripture—with the Torah or the Prophets—the community begins with the experience of the faithful: with the testimony of Peter, Paul, and Barnabas—none of whom claim special authority in the face of the communal discernment, but all of whom, instead, simply testify to the way in which they have seen the Gentiles touched and filled with the grace of the Holy Spirit….Here is diversity without division, complexity with separation, debate and dissent without the need for punishment or condemnation. In listening for the living Spirit of Christ Jesus, the Church begins by listening to the sinners and seekers who are his body in the world.

“I have thought often of this scene in Acts, over the last year, and especially as I have listened to Pope Francis speak of the need for “uproar” by religious, or call young people to make “a mess” in their dioceses. Like many, I have been refreshed and renewed not by some great doctrinal changes, but by the absence of fear expressed in the words of the Holy Father; by his trust in the workings of the Holy Spirit and his passion for courageous acts of faith—even acts that risk error or end in failure. For Francis, it seems, the timidity of tightly held borders, the safe-harbor of accepted opinion and doctrinal purity risks a greater sin—a greater loss to the Church—than the dangerous paths of love and welcome….

“In the last few weeks, the students of Eastside Catholic High School, and their companions from other schools in the area, have given us an example of the kind of passionate discernment, motivated by the Gospel, that characterizes an important dimension of Catholic education—and, indeed, should characterize our faith both in and out of school. Regardless of the particulars of this situation (and personnel issues may have complexities I do not know), these students have spoken up as products of Catholic education, as women and men motivated by the Spirit and by their own experience of grace. Though it is a painful time, their teachers and their parents should be proud of the Gospel spirit that has been planted in these young hearts. Likewise, we in the broader Church should be grateful for the mess these young people bring, and should listen with compassion and openness to the Spirit that moves within them. Their love, their gentleness, their quest to make of the Church “the home of all, not a small chapel that can hold only a small group of selected people,” demands more than the silence of authority; it demands communion and engagement with the Church—i.e., education, direction, dialogue—since their spirit is a sign of the Church and is life-blood for the Church. May we engage, with fearless love, at the side of our younger sisters and brothers; and may trust in the God whose Church we are all becoming.”

You can read the reflection in full by clicking here.

A 46-year old Catholic school teacher in Moorehead, Minnesota, has lost her job because of her personal conviction in favor of marriage equality.

Trish Cameron, who taught at St. Joseph’s Catholic School, says she is now praying for a healthier dialogue in the church on the issue of marriage.

“After 11 years teaching fifth graders at St. Joseph’s Catholic school in Moorhead, the same-sex marriage issue was on Cameron’s mind as she filled out her annual self-evaluation form this spring.

“Part of the evaluation asked teachers to rate how well they support the teachings of the church. In the comment box, Cameron wrote, ‘I do not agree with all church teachings on a personal level, but I do not bring my own opinions into religion classes.’

“That comment led to a meeting with her principal and superintendent where she explained her break with the church on the issue of same-sex marriage. One week later, they asked her to resign.

” ‘I don’t think there was any hiding my feelings, but along the way at the moments of dialogue was I thinking, “gee I’m jeopardizing my employment?” No,’ she said. ‘That never crossed my mind.’ “

The funeral of Jamie Hubley last fall was heart-wrenchingly sad. How could it not have been? Jamie was a talented teen, well-loved by family and friends. But tormented psychologically by depression and physically by bullies, the openly gay boy took his own life. That day, hundreds who packed the Holy Redeemer Catholic Church mourned Jamie, as did thousands across the city who had never met him, but were touched by his story.

Amid the grief, there was some joy, in that the Holy Redeemer’s sensitive homily and eulogies celebrated Jamie’s young life. But most unexpectedly, the service delivered astonishment to many in the congregation. Here was the Catholic Church holding a service for a gay teenager who had committed suicide. There were no euphemisms bandied about, nor did anyone talk around either issue — indeed, the deacon spoke about depression being a “cancer of the mind.” Those who had been raised in that faith all had a similar thought: This isn’t the Catholic Church I grew up with.

And that’s a good thing.