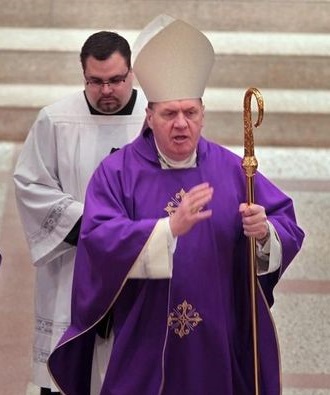 A more accurate title might be “Bishop of Chicago Continues to Step Up For Marriage Equality” because Bishop Jeffrey Lee has been such a consistent and valiant ally for equality both inside and outside the church. But the particular moment of “stepping up” I’m celebrating today was one that came out of his willingness to step up with a letter of support for marriage equality in Illinois — a letter that made the national news reporting on the legislation as it winds its way through the legislative process.

It was a moment of great delight as I sat on my day off happily having my second cup of day off coffee and watching a second hour of day off morning news to see this quote from Bishop Lee pop up on an MSNBC report. And thanks to the “rewind/pause” feature on my remote control and an iPhone camera hard-by and VOILA: the moment was “screen captured!”

My actual favorite quote from the letter was this one:

As a Christian, I believe that our society needs all of the sources and signs of grace that we can get. As a citizen of the United States, I believe in equal protection under the law. I believe that both ends will be served when marriage equality is the law of the land in Illinois, and I am grateful to be bishop in a church that offers all couples a community of faith, love, support and accountability.

Does it matter if a bishop speaks out on the issue of civil marriage equality? You bet it does. It matters to those in Illinois who will be speaking to their representatives in letters, calls and emails that they can say their faith tradition stands for equality for all.

With all the current fuss about the decision of the US Episcopal Church to consecrate openly gay bishops, and the Catholic Church’s declared hostility to gay priests and to gay marriage or even civil unions, we forget that in the older history of the church, it is not gay priests and bishops that are new, or gay marriage, but the opposition to them.  Many medieval and classical scholars have produced abundant evidence of clearly homosexual clergy, bishops, and even saints, and of church recognition of same sex unions. One story is particularly striking.  At the close of the 11th Century, Archbishop Ralph of Tours persuaded the King of France to install as Bishop of Orleans a certain John  – who was widely known as Ralph’s gay lover, as he had previously been of Ralph’s brother and predecessor as Bishop of Orleans, of the king himself, and of several other prominent men.   This was strongly opposed by prominent churchmen, on the grounds that John was too young and would be too easily influenced by Ralph.  (Note, please, that the opposition was not based on the grounds of sexuality, or even of promiscuity.)  Ivo of Chartres tried to get Pope Urban II to intervene.  Now, Urban had strong personal reasons, based in ecclesiastical and national politics, to oppose Ralph.  Yet he declined to do so. In spite of well-founded opposition, John was consecrated Bishop of Orleans on March 1, 1098, when he joined two of his own lovers, and numerous  others, in the ranks of openly homosexual Catholic Bishops.

An earlier example was St Paulinus of Nola, whose feast day was celebrated earlier this month.  Paulinus was noted as both bishop and poet: his poetic “epistles” to his friend Faustinus are noted in the on-line Catholic Encyclopedia.  What the CE does not remind us, is that Pulinus ans Faustinus were lovers, and the “epistles” were frankly homoerotic verse, which may be read today in the Penguin Book of Homosexual Verse.  Church history for its first twelve centuries at least is littered with further stories of male and female clergy, some canonized or popularly recognised as saints, with clear homosexual orientations.  Some of these, as clergy, probably lived celibate lives.  Many clearly did not.

In England, there was Bishop Longchamps, the bishop that Richard the Lionheart made Regent. The well-knonwn line on him was that the barons would trust their daughters with him, but not their sons.

Church history for its first twelve centuries at least is littered with further stories of male and female clergy, some canonized or popularly recognised as saints, with clear homosexual orientations. Some of these, as clergy, probably lived celibate lives. Many clearly did not. Among many examples from Church history, some of the better known are:

St Patrick (believed to have worked as a prostitute in his youth, and may have taken a male lover in later life);

St John of the Cross (Well known mystic, whose metaphorical poetry of his love for Christ uses frankly homoerotic imagery)

Cardinal John Henry Newman (soon to be beatified, was so devoted to his beloved friend Aubrey St John, that he insisted on being buried with him in the same grave.)

The earliest church, in Rome and in the Slavic countries, recognised some forms of same sex union in liturgical rites of  “adelphopoein” .  It is not entirely clear precisely what was the precise meaning of these rites.  They were clearly not directly comparable to modern marriage – but nor were the forms of heterosexual unions at the time.  Some claim that they were no more than a formalised friendship under the name of  “brotherhood” – but many Roman lovers called themselves “brothers”.  Some of the couples united under this rite were certainly homosexual lovers, but it is possible not all were.  What is certain, is that the Church under the Roman Empire, for many years recognised and blessed liturgically some form of union for same sex couples.  As late as the sixteenth century, there is a clear written report of a Portuguese male couple having been married in a church in Rome.

This recognition also extended to death.  From  the earliest church until at least the nineteenth century, there are examples of same sex couples, both male and female, being buried in shared graves, in a manner exactly comparable to the common practice of married couples sharing a grave – and often with the parallel made clear in the inscriptions.

The modern Church likes to claim that in condemning same sex relationships, and resisting gay marriage and gay clergy, it is maintaining a long church tradition.  It is not.  To persist in this claim, in the light of increasing evidence from modern scholars, is simply to promote a highly selective  and hence dishonest reading of history.

See also on “Queering the Church“:

From the “Lesbian and Gay Catholic Handbook”