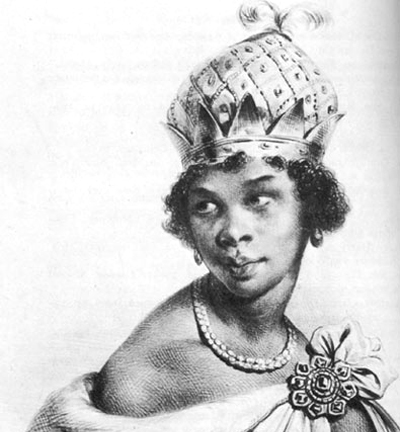 Nzinga – misleadingly represented here as “queen”
The standard platitudes about two-called “traditional  families” are full of completely groundless assumptions.  One, that this idea is in any way “traditional”, I have previously shown to be false (“Traditional” Families, Traditional “Family Values”). Another is that love, marriage, sex and child-bearing  “naturally” all belong together.  As part of a more extended investigation into the enormous variety of “natural” families to be found across the world, I have been reading about some of the extraordinary ways in which in some societies, these can be entirely independent. Today, I look at some notable crossing of female gender stereotypes from Africa.
A fascinating story of a female king comes from the country of Angola, which takes its name from the hereditary king, “ngola”, of the Ndongo people.  During the colonial wars of conquest, the Portuguese met the fiercest resistance from a king called Nzinga – who turned out to be biologically female.  Although the monarchy was reserved for men, she had forced her way into office, and so was necessarily regarded as male.  As a man, and as king, it then became important that s/he acquire a harem of wives. As Nzinga was biologically female, her wives then needed to be biologically male, who dressed as women and took female gender roles.
Nzinga was one example from history, but her story is not in any way unique in Africa. In South Africa, one of those recurring stories that crop up from time to time on the inside pages of the newspapers, often on the travel & tourism sections, concerns the remote, near mythical person, the Rain Queen of the Lovedu people. (I have seen a website on African Mythology that describes her as an actual mythical deity. she is not – she is very real, just very reclusive, shunning all publicity).  The Rain Queen is the hereditary ruler of her people by matrilineal succession. From her title, it is clear that one of her duties is to apply her hereditary supernatural skills in rain making. But it is another feature of her tradition that catches the papers’ attention: by tradition, she always marries only women, whom she takes in polygamous marriages. While the Queen gets on with the domestic duties usually associated with a husband, these wives will take on typical female gender roles, including procreation and childrearing. Obviously the Queen cannot pysically father children, so the wives are sent outside of the family unit for sex, and conception. The children thus conceived are raised in the royal family, and have nothing whatsoever to do with their biological fathers.

Ethnographic studies have documented similar practices in over thirty populations across the continent. I find these fascinating, for the clear way in which they highlight the difference between biological sex and gender, and for the distinctions between sex, marriage, procreation and child rearing.

The records show that in these societies, women who have sufficient wealth to come up with the required bride price may take wives. When they do, they form households in which they take on the traditional roles and duties of husbands, while the other women behave exactly as any other wives, taking on the domestic chores and the child-rearing.

Africa is a large, diverse continent, so it should not be a surpsie that there are many other forms of same sex relationship observed as well. Here, I have only touched on one little-known aspect of some female relationships. Later, I will also look at other unusual forms of relationships that totally contradict the idea that homoerotic relationships are foreign to Africa and introduced by outsiders, either European colonials, or the Arabs.

Naphy, William: Born to be Gay: A History of Homosexuality (Revealing History)