More thoughtful commentary on how the disputes around gay marriage are no longer between defenders of human rights and of religious belief, but about what it means to be truly Christian: 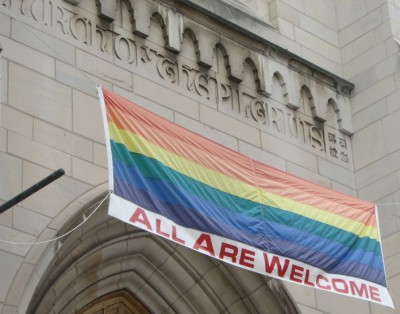 Antigay religion: How Catholics and evangelicals are coming to accept same-sex marriage.

Throughout history, religion has sanctioned and fueled the persecution of homosexuality. That dynamic may be drawing to an end. Polls, clerics, and denominations are shifting. Theology is adapting. Resistance to same-sex marriage is dwindling, and there’s no end in sight.

Will Saletan writes about politics, science, technology, and other stuff for Slate. He’s the author of Bearing Right. Follow him on Twitter.

For 15 years, the Ethics and Public Policy Center has hosted the Faith Angle Forum, a regular conference on religion and public life. Several weeks ago, the group met again to discuss current issues. Transcripts of the conference have just been posted on EPPC’s website. They underscore the extent of the anti-gay collapse.

The first session, led by papal biographer Paul Vallely and Boston Globe editor John Allen, focused on Pope Francis and the Catholic Church. Vallely, the author of Pope Francis: Untying the Knots, noted that before Francis became pope, he supported civil unions in Argentina. “I think he sees that as a human rights issue,” said Vallely. Allen pointed to the pope’s comment in a March 5 interview with Corriere della Sera:

Q: Many nations have regulated civil unions. Is it a path that the Church can understand? But up to what point?

A: Marriage is between a man and a woman. Secular states want to justify civil unions to regulate different situations of cohabitation, pushed by the demand to regulate economic aspects between persons, such as ensuring health care. It is about pacts of cohabitating of various natures … One needs to see the different cases and evaluate them in their variety.