From the Belfast Telegraph:

A gay cleric who preaches in drag wants to bring his message of love to Belfast. 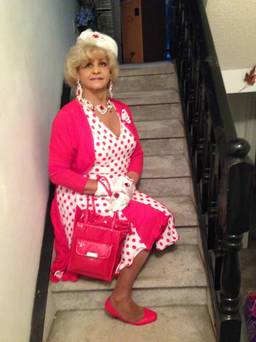 Belfast born Ron Eberly, who describes himself as “Christ Drag Queen”, left for Canada in 1975, but now he wants to return home to speak in churches as his glamorous alter ego — Mz Rhonda.

The son of a baptist preacher, Ron emigrated from Penrose Street off the Ormeau Road with his family and later attended bible college in Canada.

He met his wife with whom he had two children during a missionary trip to Belize — but they divorced eight years later when Ron realised he “had to live an honest life”.

Ron’s family disowned him for 20 years after he came out, but he reconciled with them shortly before his parents’ deaths in 2012.

He still uses his late mother’s hats to perform as Mz Rhonda because he says they make him look like “a little church lady”.

Ron found love and married again 14 years ago, but this time to a man.