Let us never forget, that in Catholic (and other) theology, it is not the priest or minister that administers the sacrament of matrimony, but the two spouses, who administer it to each other, in the sight of God and the community. It is also not the state that makes a marriage, but the mutual commitment of the spouses: all that the state does, is recognize and register the marriage. Informal, unregistered marriages are common in many parts of Africa,

This lesbian wedding in Uganda is thus as valid as any other unregistered marriage – even if it will garner direct opposition and possible prosecution from the law, instead of the approval it deserves. 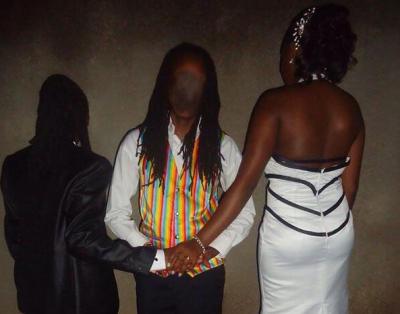 A brave lesbian couple in Uganda has held a wedding a day after parliament passed a bill that threatens gay people with life in prison if caught expressing their sexuality.

Kenya gay rights activist Denis Nzioka tweeted a photograph of a celebrant and two women in wedding garb and said that Ugandan activist Kasha Jacqueline had attended the marriage. ‘This is what I call guts,’ he said.