It is surely obvious to anyone who has given more than a cursory look to the problems of abuse in the Church, that a major part of the causes of the cover-ups, secrecy and protection of offenders that we have seen in the past, comes the insitutional culture which demands unquestioning loyalty and obedience to the hierarchy of control. (This of course is in sharp contrast to the Church’s own teaching on secular law. Where a law or governing regime is unjust and brings harm to the innocent, we are clearly told to oppose it. ) The Church however, has never been much given to applying to itself the standards it expects of others.

Fortunately, we are starting to see some small glimmers of resistance and breaking of ranks within the clergy. Mostly, this has been mild, or expressed behind closed doors. Now we have one brave priest who has spoken out unequivocally, stating that he does not believe that Benedict XVI is speaking the truth about his own past record, and that he needs to resign to restore the confidence of Catholics in the Church. He has done so, moreover in the most appropriate, public manner possible: in a Sunday sermon during Mass. 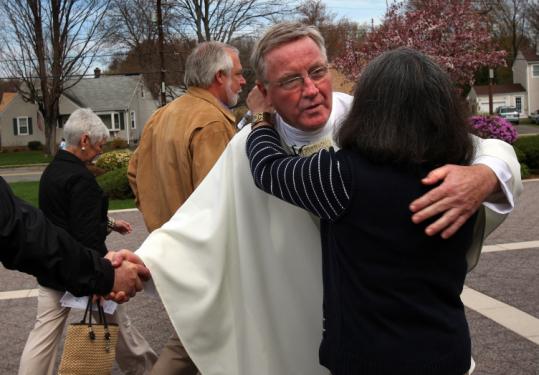 The Rev. James J. Scahill has been in trouble with the “hierarchy” before, over his public stance against official cover-ups and protection of offenders, but this is going a whole lot further. He  understands very clearly the obvious risk he is taking, but believes that in conscience, he has no choice.  This is clearly in accordance with the Church position that I was taught in apartheid South Africa on dissent in conscience from injustice,  but I don’t suppose that is how the men in control of the Church will see it.  How will they react?

That we cannot yet know.  If there is an attempt to discipline him, I will be interested to see whether they move any more swiftly than they did in the numerous cases now coming to light where action against priests known to have sexually molested minors was glacially slow, or even non-existent.  Fr Scahill will at least have the backing of his congregation.  It is notable that at a time when Catholics around the globe are leaving the Church in droves, or simply not bothering to attend Mass, attendance at his own parish is booming.   He describes the standard expectation of unswerving loyalty and obedience as “myopic”. He is right. Back in the old South Africa, critics of the government were routinely described as “unpatriotic”  (which has left me with an abiding distaste for the whole notion of reflex patriotism). I and many others knew though, that true fidelity to the good of the country as a whole, not just that of its rulers, demanded dissent, resistance, and (sometimes) defiance of the law.  Precisely the same principles apply now in the Catholic Church.  James Scahill deserves our support.

The Rev. James J. Scahill describes himself as “rather a reclusive person.’’ He insists he is no rebel.

But the parish priest from East Longmeadow was fielding media calls from around the country yesterday about his request from the pulpit on Sunday that Pope Benedict XVI step down over his handling of clergy sexual abuse.

In an interview, Scahill sounded exhausted but firm as he reasserted his critique of the pope: “The right thing is to be truthful, and if he is not up to dealing with this, then he should have the integrity to resign.’’

Scahill has been an outspoken critic of the church’s handling of sexual abuse cases since shortly after he arrived at St. Michael’s church in 2002, the year the clergy abuse scandal exploded in Massachusetts.

He infuriated the local church hierarchy by withholding payments to the Springfield Diocese until it did away with a fund to assist dismissed priests.

He made national news by pressing for a fuller investigation of the 1972 killing of a Springfield boy whose parents attribute their son’s death to an abusive priest.

And he helped to reveal the sexual misconduct of former Springfield Bishop Thomas L. Dupre, who abruptly resigned after he was confronted with accusations that he had abused children as a parish priest.

At Creative Advance, Gerald had an extract from a report by a local paper:

“The church will not have myopic obedience from me like the myopic obedience of the soldiers of Hitler,” he said. “There is nothing more prolife than the better protection of children from exploitation of any kind from anyone, and yet this church has remained patently silent about this.”